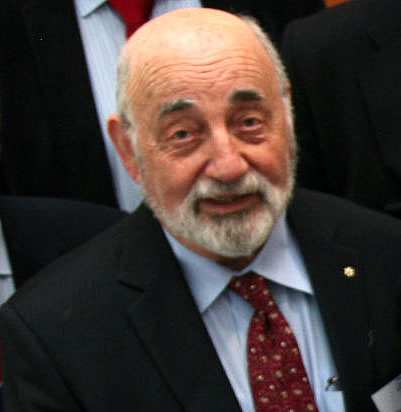 Emeritus Professor & former Director of the Centre for Research

Albert J. Aguayo received his M.D. in 1959 from the University of Cordoba, Argentina and trained in clinical neurology and research at the University of Toronto, McGill University and the United Kingdom. He is Emeritus Professor and the former Director of the Centre for Research in Neuroscience at McGill University. A scientific journal editor, as well as a member of several Editorial Boards, he has authored more than 150 scientific publications. He is the recipient of honorary degrees from the University of Lund (Sweden), Queen’s University (Canada) and the National University of Cordoba (Argentina). His awards include the Gairdner International Prize, the Wakeman (USA), Helmerich (USA), Ameritec (USA), Ipsen (France), Leo Parizeau (Canada), Cotzias (USA), Wilder-Penfield (Prix du Québec), the Alcon Research Institute Award for Vision Research (USA), the Killam Prize (Canada), the Christopher Reeve Medal (USA), The Queen Elizabeth (ER) Golden Jubilee Medal (Canada), the J.E. Purkinje Honorary Medal for Merit from the Academy of Science of the Czech Republic, and the Canadian Medical Association’s F.N.G. Starr Achievement Award. He is also an Honorary Member of the Board of Director of Neuroscience Canada and the Rick Hansen Foundation.

He is a Fellow of the Royal Society of Canada, the Institute of Medicine of the National Academy of Sciences (USA), and an Officer of the Order of Canada. Aguayo has received Honorary Memberships in several professional organizations including the Latin American Academy of Sciences, the European Neurological Society, the Argentine Society for Research in Neuroscience, the Ontario Neuro-trauma Honorary Directorship, the American Association of Neurological Surgeons, Cordoba’s Academy of Medical Sciences and the Dana Alliance for Brain Initiatives Distinguished Leadership. In 2010 he was awarded the McGill Medal for Exceptional Academic Achievement, was elected to the Canadian Medical Hall of Fame and named also “One of the Ten Most Influential Hispanic-Canadians”.

Aguayo has taught at institutions in various parts of the world, including the Marine Biology Laboratories in Woods Hole (USA), Cold Spring Harbor (USA), the Society for Neuroscience’s “Neurobiology of Disease”, the Harvard-McGill Annual Course on Neuromuscular Disorders, and at IBRO-sponsored schools and courses in the Philippines, Sri-Lanka, Spain, Morocco, South Africa, Nigeria, Brazil, Uruguay and Canada. In 2006 he was awarded the “Cajal” lectureship chair at the Universidad Nacional Autónoma de México (UNAM). In 2007, the FRSQ/INMHA created the “Albert J. Aguayo International Fellowship in Neurosciences” to support the training in Quebec of students from developing countries. In 2010, McGill University inaugurated the “Albert J. Aguayo Annual Lecture in Neuroscience”.

His past administrative responsibilities include the Presidency of the Society for Neuroscience (USA), the Canadian Neurological Society and the Canadian Association of Neuroscientists. He has also served as Scientific Director of the Canadian Network of Centres of Excellence in Neuroscience, Chairman of the Council of Scientists of the Human Frontier Science Program (Strasbourg), and been a member of a number of scientific advisory and review boards, including the Medical Research Council of Canada, the Howard Hughes Medical Institute (USA), the American Paraplegic Association, the Rick Hansen Legacy Fund (Canada), the Grass Foundation (USA), the Max-Planck Institute at Martinsried, Germany (Chair), the Friedrich Miescher Institute in Basel, Switzerland (Chair), the Riken Institute’s Frontier Research Program (Japan), the Institutos Científicos Milenio (Chile), the Ipsen Foundation (France), the Leloir Institute for Medical Research in Argentina (Chair), the American Neurosurgical Association Research & Education Foundation (USA), the Winn Prize Committee (USA), the Montreal Neurological Institute’s Scientific Advisory Committee, the Canada Council for the Arts and was also a Director of the Neuroscience Canada Foundation.

Currently, he serves on advisory boards of the Christopher and Donna Reeve Paralysis Foundation (USA), the IBRO committee for the Rita Levi-Montalcini Fellowships for African Young Women Neuroscientists, the Pew Charitable Trusts (USA), the External Advisory Board of the Methodist Hospital Research Institute in Houston (SA), and the Executive Committee of the Dana Alliance for Brain Initiatives (USA). He is also the Director of the Canada-IBRO International School of Neuroscience and a member of the “Brain@McGill International Collaboration Program”.

Dr. Aguayo served as Secretary General of the International Brain Research Organization (IBRO) from 2000 to 2005 and was President of this organization from 2005 to 2007. IBRO is an ICSU and UNESCO affiliate that represents over 50,000 neuroscientists from 84 countries. Under his stewardship the membership of IBRO went from 46 to 73 affiliated organizations and its international school programme increased six-fold.

Aguayo’s main scientific interest is the study of the mammalian central nervous system’s capacity for regeneration and repair.